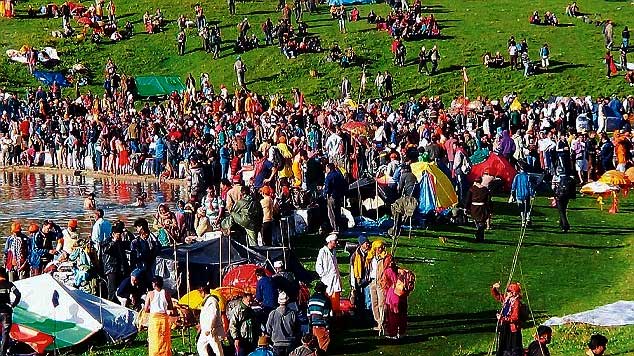 The longest hiking barges in Asia is held in Uttarakhand is the journey to send their house in-laws to the Aradhya Devi Mata Nanda of Himalaya region. Patti Chandpur and Shri Guruji region is considered to be mother Nanda’s parents’ home.

This journey also explores the conditions of daughter’s house in-laws and loves toward them in ancient times in mountainous surroundings.

Mother Nanda is considered to be the wife of Lord Shiva and Kailash is the home of Shiva, or Nanda’s house in-laws. The legend also said that once Nanda had come to her mother’s house. But she could not have been in-laws for 12 years with some reason. She was later sent to her in-laws with respect.

According to the legends, mothers of Jaman Singh Jadoda – ‘Nanda Rajarajeshwari, Jai Bola, Jai Bhagoti Nanda, Ma Srinanda of high Himalayas’ are given high value and respect in this festival.

In Raj Jat yatra, before departing for the House in-laws (Kailash), Mother Srinanda stays with people of Jodora Gusai (Bulkari) for the nightly rest.

It is believed that for the discharge of the word of mother and devotee, mother Nanda reaches Ida-Badhani, the first place before the Kailash departure in the state.

In order to adhere to the word given to your devotee, Mother Nanda reached to the village of Ida-Badhani to stay in the house of Jadora Gusai. Here the Jadoda descendants are offering their Arvad Javar, Kaleu and make up materials.