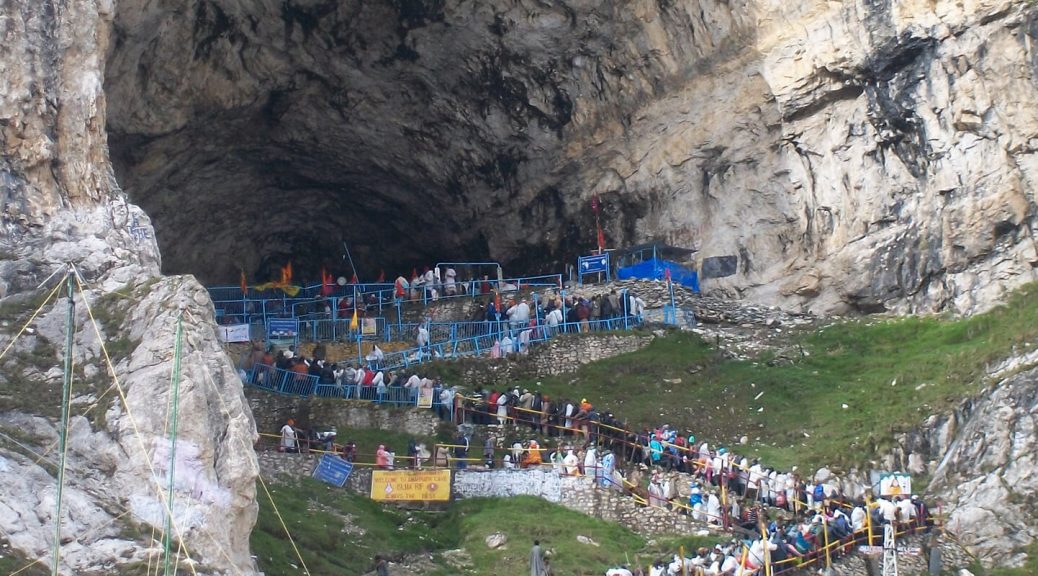 There is a Dham Amarnath cave among many holy shrines of Lord Shiva. This cave of Amarnath is located in the state of Jammu and Kashmir. In Amarnath cave, Lord Bhole Shankar had told the story of immortality to Mata Parvati. From the mere sight of Baba in the Amarnath cave, the person easily crosses many obstacles in life. Amarnath’s holy journey has been started from 1st of July. Every year in this cave, natural Shivling is built, for which the devotees of Bholenath come from abroad to see. Let’s know the importance of Amarnath cave and its mystery.

According to the belief Lord Shiva narrated the story of immortality to Mata Parvati sitting in this cave. For this reason, this cave is of great significance. Every year in this cave, Shivlinga is made from natural ice. In addition to Shivalinga, there is also a snow-like Linga of Lord Parvati and Shiva Putra – Lord Ganesha.

Shivalinga and Mata Shakti together

In the Amarnath cave, Baba Bholenath is situated on the same seat, where Mahamaya Shakti Peeth of the goddess Sati is located. In this place the throat of the goddess Sati was dropped. In the same place, at the same time, the desire of all kinds is filled with the philosophy of Shivling – Shaktipeeth.

The Amarnath cave was discovered nearly 500 years ago and the credit for finding is given to a Muslim, Buta Malik. The descendants of Buta Malik still live in the place called Batkot and are directly connected to the Amarnath Yatra.

Everything was abandoned before the story of Amarakatha

First of all Lord Shiva gave up his Nandi, where he left Nandi, he goes to Pahalgam. The journey of the Amarnath cave starts from here. After this, the moon was freed from its jata. Wherever the moon is abandoned it is called Chandanvani. After that Lord Shankar left the snakes holding in the throat. This place was called Sheshnag. After this, Shivaji left Ganesha on the Mahagunas mountain, where Mahadev abandoned the insects called Pisu, the place is Pisu valley.

There was also a pair of pigeons during Amarkatha, who listened the story and blowing the voices in the middle. Mahadev is listening to the Parvati story. The pigeons became immortal after hearing the Amarkatha. Even today in the cave, a pair of pigeons appears. It is believed that even today the devotees of the two pigeons see the philosophy.

How to Reach Amarnath

How to Reach Amarnath via Flight

One must deboard at the Sheik Ul-Alam International Airport Srinagar to reach Amarnath via air. There is a day by day flight administration from Delhi and Jammu and on certain days, flights likewise handle from Chandigarh and Leh. The airport is situated at a separation of 96 km from Pahalgam. One of the courses to Amarnath Cave begins from Pahalgam and directions a trek of around 48 km.

How to Reach Amarnath by Road

Jammu and Srinagar are the nearby cities that have the possibility to take a trip to Amarnath by road. Jammu is in a 247.7 km separation from Pahalgam. After arriving at both destinations, one should attempt a trek to the Amarnath Ji Shrine.

How to Reach Amarnath via Train

There are no local trains to Amarnath. In any case, you can land at the Jammu train station, which is 384 km from the Amarnath cave. From that point, without much of a stretch you can get a transport to Pahalgam or Baltal from where you can start your trip to the Amarnath cave via cab or taxi.

On the other hand, the pilgrims can book helicopter to reach Amarnath from Pahalgam.